An Invitation and a lamentation

Our community is currently living in a tsunami of trauma and terror. It reminds me of the words of the Black national anthem, “Lift Every Voice and Sing”: 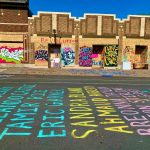 God of our weary years,
God of our silent tears,
Thou who has brought us thus far on the way;
Thou who has by Thy might
Led us into the light;
Keep us forever in the path, we pray.

It is hard to stay on the path right now because of the trauma and terror we see and experience every day. I’d like to invite you into my world for one typical Tuesday morning, June 20, 2020. When my husband Pastor Ralph Galloway and I woke up to gunshots at 6:15, the first words out of our mouths were, “God help us. Bless us to be a blessing.” We began to pray Psalm 91, “And God will give his angels charge over you,” and then we checked our phones.

6:30am. Both our phones ring. The terrified voice on the other end says, “My landlord refused to pay the water bill; by law, isn’t he supposed to pay it?” We said yes. “Well, the water company is coming to disconnect the water and how am I going to bathe my children or cook?” We ask how much it is ($376) and say we will call the water company together and negotiate. She says, “I tried that.” We asked if she had the paperwork (“yes”) and said we would pay it and then help find an attorney to help with her landlord. She says, “If I get an attorney, he has threated to evict me.”
7:15am. I washed my face and went into the kitchen, and watched three black trucks with confederate flags drive slowly down our street. Ralph went outside and checked the alley for incendiary devices; our neighbors have found them in alleys all over the Northside.
8:20am. My phone rings again. There is weeping and wailing. “…I can’t sleep. My sons, my sons, my sons, they are afraid to leave the house, but if they don’t go to work we won’t have enough to pay the mortgage. It took a lot for us to get this house and we want to hang on but can’t if everyone is not working.” I asked Pastor Ralph to take this call; he greeted her and asked her what happened. She says “My sons, they are afraid to go to work because of the cops; they don’t want to end up like Mr. Floyd. Can you talk to them?” Pastor Ralph says that he will be right over to talk and drive them to work.
10:00am I read an email from Sondra Samuels, Executive Director of the Northside Achievement Zone, asking us to write the Commissioners and advocate that they take time for community input before defunding the police. The letter is written and sent, signed by Ralph because he was born and raised on the Northside, and it is his home.
12:00noon. We received a joint text that said, “Pastors, as you know I have been protesting. And I wore a mask. I had to do it because there have been way too many deaths. I usually don’t protest, but enough is enough. So, with every step I took I called out, ‘George Floyd, Tamir Rice, Brianna Taylor, Jamar Clark, Philando Castile, and on and on.’ For 401 years our people have died brutally and violently. After the protest I started not feeling well; me, my mother, my three sons, and my husband have all tested positive for COVID19. Where is God in that?”

I’ve shared a typical morning with you. By now you have heard many facts and figures about unrelenting racialized oppression; the pandemic’s unrelenting impact on persons of color; the impact of police violence and murder; the cries from the community regarding defunding the Minneapolis Police Department; and the day-to-day grind of generational poverty and oppression. North Minneapolis is the hotbed of COVID-19 in the state of Minnesota. You know the facts AND know we are a Matthew 25 Presbytery. How that translates to our work today:

• When I was hungry and thirsty….Generational poverty, utilities shut off’s and hunger;
• I was a stranger and you invited me in…..Housing and homelessness;
• I was sick....health disparities in the African-American community;
• I was in prison...Mass incarceration including survival sex for women, men, and girls of color.
I hope by now that many of you had heard the statistical data in relation to the disparities that we live in regarding African-Americans in Minnesota – and if you haven’t, here are a few:

According to the Sentencing Project, “There are 2.2 million people in the nation’s prisons and jails, a 500% increase over the last 40 years.” There is a large racial disparity within this growth of imprisonment, often called mass incarceration. According to the Sentencing Project, one in three black men born in 2001 have a lifetime likelihood of being imprisoned compared to only 1 in 17 white men. This disparity is even greater for black women. One in 18 black women compared to 1 in 111 white women.

I started this letter stating that this was my world, and it is true. But as a connectional Church, this is OUR world! And as the Reverend Dr. Martin Luther King Jr. stated in 1968, “We are living at a time when we must choose chaos or community.” In the midst of this chaos, trauma and terror, I decided to share my truth with you in hopes that you choose community by connecting: connect with the hungry,
connect with the sick, connect with the dying, connect with the incarcerated, connect with the homeless. Connect, connect through prayer, connect! It is through connection that we will find a way to move together into community.

I’m trying to linger in the lamentation space that Lisa suggested we spend time in this week. I’ll refrain from offering any “fixes,” which I don’t have anyway.

I moved to Minneapolis in 2008, and I lived at 23rd and Bryant Ave N until 2011. As an administrator with Minneapolis Adult Education, my work routinely brings me near the corner of N Lyndale and W Broadway. I regularly have the opportunity to interact with the Northside community and to see the issues Rev. Galloway faces up close. I hear the same kinds of stories from students who are working to learn English or to earn their GED. On days when my work brings me to this neighborhood, I usually ride my bike from South Minneapolis (not far from 38th and Chicago) to our North Campus site.

The stark segregation in our city stares at me as I ride my route. On my way home as I ride across Broadway near the now boarded-up Cub foods toward Plymouth Avenue, I think about the bookends of my commute. My ride crosses the two streets in our city that have burned: Plymouth in 1967; and of course, Lake Street. As I ride east along Plymouth and over I-94, the highway which isolates downtown from the Northside like a moat, my anxiety sometimes lifts a bit. The protected bike lane is a welcome buffer from drivers, but I really feel at ease when I approach the edge of the North Loop. Suddenly, things feel different. The North Loop feels safe, “normal,” the chance of a random bullet much less likely. Unlike on Broadway, where there’s a bullet hole in a window facing my school.

I think to myself often: How did things get this way? I can’t believe it was by chance or an organic occurrence. Why is there so much wealth by our lovely lakes, and homeownership is the exception in the mostly African-American neighborhood I was just in all day? It’s obvious to me that the stark juxtaposition of these two geographically close but night-and-day realities is here by design. Our present reality in this city and country can largely be traced to a history of racism that has infected our institutions and systems. The good news is that if our institutions and systems spawned these things, then we have the capability of making different choices and creating more just systems, which is why I’m encouraged that the Hennepin County Board recently declared racism to be a public health crisis.

As we work for justice and build better systems and institutions, we will still face the challenging work that Rev. Galloway translates from Matthew 25. None of the serious and difficult issues she and the other residents of the Northside face are going away anytime soon.

I keep coming back to this passage by James Baldwin: “They have had to believe for many years, and for innumerable reasons, that black men are inferior to white men. Many of them, indeed, know better, but, as you will discover, people find it very difficult to act on what they know. To act is to be committed, and to be committed is to be in danger.” (My emphasis added).

And from there I go to… It’s easier for a camel to go through the eye of the needle than for a rich [privileged?] man to enter the Kingdom…

It makes me wonder: What am I willing to give up? Time, money (how much), safety? As James Baldwin writes in The Fire Next Time “It is rare indeed that people give.  Most people guard and keep.” Am I committed enough, as Baldwin writes, to endure danger? What danger and how severe?

If anyone is so inclined—and this is something that can even be done during the pandemic—drive up Wirth Parkway, exit at Lowry and drive down West Broadway. Maybe even drive up N Emerson to Lowry and then south on N Lyndale. Turn east on Plymouth, go over I-94 and into the North Loop area. If you want, stop at Pyres for a physically distanced beer (plenty of outdoor seating and you can order using your phone) or Kombucha along the river near where our city was founded (the Italian Pilsner is exceptional!). Sometimes I find myself sitting there thinking about these things and wondering if I’m up to the task (In my work with students, I can’t count the times I’ve been uncomfortable, afraid, doubtful, ashamed, ready to do something easier). As I sit there enjoying myself, I also think about what is happening just a few short blocks away—a five-minute bike ride that can’t be more than a mile as the crow flies. Worlds apart by design. I wonder: What is my place in it?

I try to remain hopeful, and St. John’s helps with that. I figure if people have created these circumstances, then we can also improve them. But there will be a cost to those of us with something to lose. Maybe even danger.