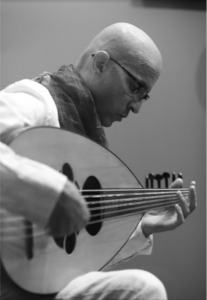 Syrian musician and educator Issam Rafea brought his music to 9 and 11am Sunday services on February 28th. Issam has concertized widely in solo and ensemble settings around the world – including Syria, the U.S., Germany, Egypt, Turkey, Denmark, the United Arab Emirates, France, the U.K., and Japan.  He has composed and arranged music for television, films, and theatre since the 1990’s. From 2003-2013, Issam was Principal Conductor of the Syrian National Orchestra for Arabic Music in Damascus, Syria. For more information, check out his website here.