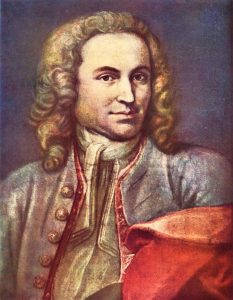 The Capriccio on the Departure of a Beloved Brother (Capriccio sopra la lontananza del suo fratello dilettissimo) in B-flat major, BWV 992, is an early work by the adolescent Johann Sebastian Bach, rumored to have been written to mark the farewell of his brother Johann Jacob who left to serve as the oboist in the army of King Charles VII of Sweden. Bach scholar Christoff Wolff believes a more plausible dedicatee would be Bach’s schoolmate Georg Erdmann who may have been honored with this piece at some sort of graduation party when Erdmann left St. Michael’s School to pursue an academic career. Craig requested this work to punctuate this morning’s liturgy in celebration of Chad Smith, his “fratello dilettissimo” in Christ, as well as to express his bittersweet farewell to St. John’s as he completes his Curacy on Sunday, September 2 and prepares to begin serving as the Associate Rector of St. John the Evangelist Episcopal Church in St. Paul. The progression of affekts in the six movements of BWV 992 expresses the human process of moving through grief and loss to acceptance and celebration.