I am grateful for having been given the gift of a 3-month sabbatical, with pay, this summer. Through the generosity of the Reverend Susan J. Barnes and Vestry of St. John’s Episcopal Church, I was able to spend the months of June, July, and August away from my regular duties as Minister of Music. To be honest, during the months preceding my looming summer exodus, I was uneasy with the prospect of laying down the work I love in order to….Uh, NOT do the work I love?! Why would I want to do that? Plus, I really had no clue what it was I was supposed to do with all that time…

That said, Susan encouraged me to line up some things that would qualify as “enriching and renewing” pursuits: Some professional development – some rest and “re-creation”. My voice teacher recommended I investigate summer programs at Westminster Choir College in Princeton, New Jersey (her alma mater). So I signed up for of a 5-day conducting class scheduled for the last week in June. In addition, I learned of the annual Mississippi Conference on church music and liturgy that would take place the last week in July. I signed up for that. I intended to fill up the remaining time with house repairs, traveling to visit family and friends, catch up on reading, etc. I pitched that plan to Susan. She approved it. And away I went…

So, first up, Westminster Choir College: I was anticipating some rudimentary conducting pattern review and maybe some tips on running a choir practice more effectively. What I encountered was Dr. James Jordan, senior conductor at Westminster, a prolific author and brilliant “guru” imparting the secrets of the universe to all who have ears to hear. Sure, he taught conducting gesture and technique – but before, beneath, and beyond that, he taught a philosophy of loving and respecting one’s self and others. Of caring for one’s soul through meditation and time spent in solitude. And then, in all honesty and humility, learning to authentically share that which is good, true and beautiful in one’s self “with the people we love, through the music we make”. A masterful conductor, Dr. Jordan is an advocate for “evoking sound” from your ensemble – not making your choir sing, but causing them to sing. Let me preface what I’m about to describe by saying that I’ve sung and played under many a conductor in my 55 years on the planet, but have never before experienced what happened near the end of my week in Princeton: Call me delusional, call me impressionable, call me “open to the possibility” – But as Dr. Jordan was about to demonstrate a conducting concept while taking us through a short musical passage, he raised his hand, and slightly leaning his body in toward us, seemed to touch some kind of invisible energy field that literally connected directly to me and everyone else around me. It was something akin to actual physical contact – and I couldn’t help but sing! I NEVER saw that one coming – but am forever grateful for having experienced it.

Next, The 40th annual Mississippi Conference on Church Music and Liturgy: A great week spent in an Episcopal retreat center 40 minutes outside of Jackson, MS. Great food, great people, great singing! Surrounded by 40+ church musicians from Mississippi, Alabama, Arkansas, Texas, Florida & Illinois, we primarily prepared choral music to sing first in a Thursday Evensong at a small Episcopal church in Jackson, and later during a Sunday morning Eucharist at the Episcopal Cathedral in Jackson. Described by some as a “mid-sized” conference, the majority of participants are repeating attendees – many for multiple years, a few for decades. I’d love to be counted among them in the future.

The remainder of my summer sabbatical time was occupied with house repairs and travel to visit family and friends. I played for and/or attended 5 funerals, lost a beloved pet to cancer, had poignant visits with old friends, read WAY more than is normal for me, listened to music I’d forgotten I loved, and cried an ocean of tears.

I didn’t know what to expect going into it, nor did I anticipate any sort of profound take-away, but by the time I returned to my work at St. John’s in September, I can truthfully say that I felt completely broken open by my sabbatical experience. I don’t know how else to describe it, except to say that I am deeply grateful for the blessing of time: for enrichment and renewal, for rest and re-creation. 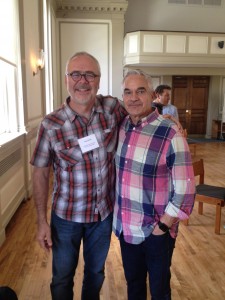