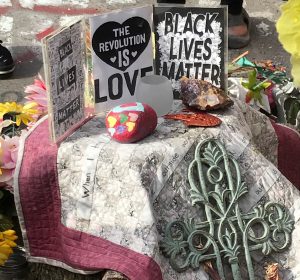 Today is Earth Day, the day we celebrate with awe and humility the breathtaking beauty of the natural world.  It’s two days after Officer Derek Chauvin was found guilty, on all counts, of the murder of George Floyd—the first time a white police officer has ever been convicted of killing a black person in Minnesota. Although these things might seem completely unrelated, they are not. They both point to the need for an utterly new paradigm of living. It’s a paradigm that breaks apart the old paradigms of dominance, possession and punishment, and instead values relationship, liberty, restoration and humility. It’s a paradigm that is fully embodied by Jesus’ Way of Love.

On Wednesday in the virtual Healing Prayer Tent  the reflection leader was Darnell Moore, queer black activist, writer and theologian. He spoke profoundly of navigating between joy and lament upon hearing the verdict Tuesday. He said that seeing Officer Chauvin led away in cuffs did not feel like true justice to him. He spoke of the “limitations of our moral and spiritual imagination, which has been shaped in a country where justice looks like punishment, looks like cages, cuffs, police policing the police….like violence in response to violence.”

“imagine a world where a sentence might result in someone like Chauvin having to commit to service over an extended period of time in the same streets where he took George Floyd’s life. Where Mr. Floyd’s family and community could decide what type of restitution that Chauvin would be committed to be performing, to bring life where he once brought about a death. The easy way out isn’t a cage, but the harder work of deep accountability, self-reckoning, the seeking of forgiveness, the redressing of harmful systems, and reconciliation.”

In a culture shaped by the profound intermarriage of white supremacy and imperial Christianity, it is hard, sometimes, to see the forest for the trees. It’s hard for us, as a predominantly white congregation, always to see what is sick in the way that we think and perceive and operate. But I know in my bones that there are a few moves the Spirit is inviting us to make, that have everything to do with our spiritual and moral imagination. They include letting go of acquisition, control, and possession as primary relational orientations, and instead emphasizing coming alongside, non-possession, restoration and togetherness. Instead of seeing the Earth or other people as resources for our use and benefit, we must see mutuality, relationship and solidarity—what “love” really looks like. Instead of seeing justice primarily in terms of consequences or punishment, we must see the possibilities of restoration. We must look Officer Chauvin in the face, and allow the anguish of recognizing ourselves in his eyes, in his stance, and then ask: what will it take to restore this person to full humanity, and to making amends for the horrific harm he, and we, have wrought? We must imagine a world in which our centuries-old desensitization to the suffering and very being of others can be replaced with an exquisite sensitivity to the beauty, energy, giftedness and struggle of every living creature.

All of this is beyond us. But all things are possible for God. Jesus leads us on the very Way of Love that offers transformation both to the oppressed and also to the oppressor. Just as Howard Thurman asked the essential question about what, if anything, the Way of Jesus could say to Black folk in America, so too must white people ask: what does the Way of Jesus offer us as a way to heal, be forgiven, and to creatively make amends—true repair—for the harm that has been done? What does a Christianity that has been divorced from empire and colonizing look like? It looks like Jesus.

We cannot ever bring back George Floyd, or Daunte Wright, or Ma’Khia Bryant, or the countless BIPOC folks who have been lost. We may not be able, at this point, to lower or even maintain the temperature of the ocean. We cannot restore the Great Barrier Reef in Australia, or bring back the species that have become extinct. But we can become exquisitely sensitive to each other living being, including ourselves, and then make the lifestyle changes that become obviously necessary when we do that. We can awake from numbness. We can turn1 from the sin at the heart of racism and exploitation of the earth, which is dominance, self-centeredness, and hatred. We can learn to allow our imaginations to be shaped by the Holy Spirit and the words of ancient and contemporary prophets like Isaiah and Darnell Moore. We can pray the prayer of utter repentance and surrender to God. We can worship together with the intention to leave the old ways behind and encourage one another as we go. We can bless the world with humility and generosity and an emphasis on relationship, not problem-solving. We can go outside our comfort zone and find it none other than the way of life and peace. And we can rest, knowing that we are workers, not master builders; ministers, not messiahs.2

I pray that you will take some time today to just to outside, sit next to the nearest living creature—whether that be a tree, the grass, your neighbor, your child, or an ant on the sidewalk—and just be. Notice what is stirring in you. Invite the Spirit of Christ to begin to reshape your moral and spiritual imagination, and bring what comes to the St. John’s community, trusting that God is making everything new.

In Christ’s love, in solidarity with every living creature,

1 The verbs that follow—turn, learn, pray, worship, bless, go and rest are the spiritual practices describing Jesus’ Way of Love. More information can be found here.