The World I Thought I Knew

The World I Thought I Knew:  Reconciling Minnesota’s Competing Narratives
by Mark Lindberg

In 2003, as a senior program officer for the (then) Otto Bremer Foundation, I reviewed a funding proposal from a local nonprofit that contained incomprehensible information.  According to a joint study by the Council on Crime and Justice (CCJ) and the Institute on Race & Poverty (IRP) at the University of Minnesota Law School, Minnesota ranked 2nd in the country in stops, arrests, and incarcerations of African Americans on a percentage of population basis.  That is to say, we were 49th out of 50 states in the country, save one – Mississippi.  While it was a long time ago, the statistics have stuck with me as if it were yesterday.

That information was particularly disheartening to me as someone who had taken a great deal of pride in being from Minnesota.  By 2003, I’d spent two different stints overseas with the Peace Corps and had worked as a lawyer in Washington, D.C.  I loved telling friends around the globe about Minnesota.  Wendell Anderson’s picture on the cover of Time embodied my sense of the state:  good schools, Fortune 500 companies, and a progressive political landscape. I took particular pride in Hubert Humphrey’s early efforts as Minneapolis Mayor to champion ‘the bright sunshine of human rights’ at the 1948 Democratic National Convention and Don Fraser’s legislative achievement to link U.S. foreign policy and human rights while representing Minnesota’s Fifth District in Congress.  Walter Mondale’s public service and Paul Wellstone’s fiery commitment to social justice were in this vein.

It was hard for me to reconcile this history and perspective with what I was reading those many years ago.  It was the beginning of a more complete narrative of ‘the land of sky-blue waters.’  We seemed to have it all – for those who are white.

Since then, I have become well-acquainted with the many areas of our lives where disparities exist between whites and communities of color – access to health care, discriminatory housing policies, and the persistently bad outcomes for students of color.  As a parent of two children, I was particularly troubled by the education-related outcomes.  The outcomes data seemed indisputable, and the stories about excessive punishment for kids of color was hard to avoid.  But the issues seemed complex, and my kids were more or less making it through, so my concerns never rose to a level where I felt compelled to try to change the system.

My awareness of the issues was essential for my role as a program officer, but it was, in a sense, academic (for me).  I could choose to try to do something more about it, or not.  My greater awareness fueled an impromptu run for the legislature in 2003, and I have been involved in my church’s “outreach” efforts for years, including participation in training to “un-do” institutional racism.  But those efforts feel shallow and convenient right now.  The ability to step into and out of the public arena over the years is a convenience that can only be described as white privilege.  I know that now.

Last week, the data and statistics came tumbling out of the MPR host’s mouth, as filler between segments, as naturally as water going over the Minnehaha Falls.  It could have been 2003:  “…Public health officials expect people of color in the state to be hit harder by the novel coronavirus than white Minnesotans;” black people are incarcerated at rates nearly 10:1, compared to whites; median household income for black families lags by about half compared to whites and unemployment and home ownership rates are also shockingly divergent.  But it was 2020.  Nothing, really, has changed.

The record scratched in my head back to another Minnesota legend, Bob Dylan, who once wrote in a song, “what good am I if I know and don’t do?”  The murder of George Floyd has created an opportunity to unlearn innocence and be absolutely clear about the good and the bad of the state we love and its history.  And it’s a time to unlearn distance and let go of the illusion that violence to one member of my community does not touch us – me – personally.

“Time to rebuild a bridge” 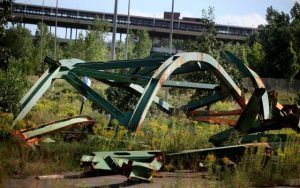 Mark Lindberg is a member of St. Johns, and a program director at Margaret A. Cargill Philanthropies.