What I am doing now

What I am doing now
Jil Evans

The Lord has filled them with spirit, intelligence, and knowledge of every kind of craft to devise artistic designs. He has filled then with skill to do every kind of work done by an artisan or designer. (words of Moses in Exodus, speaking of those whom God has appointed as artists)
So. Even as long ago as the time when the Israelites were wandering in the wilderness, God was inspiring artists, and does so to this day.
But now ….??? We all know that any number of professions and vocations have taken a major hit during the upheaval of normalcy brought about by the pandemic. Artists of all kinds have suffered seriously, because artists do not work just because they feel like creating something, but because they are in the business of communicating something precious and personal from their heart, mind, and soul, and need an audience to receive that artistic statement. Perhaps the most seriously affected have been performing artists, because it will be some time before we all can feel safe gathering in large crowds to watch performances.
But visual artists also need people to view the work they do, and while performers can sort of get by with Zoom presentations, visual artists may well be more dependent on the presence of the viewer to experience a more intimate relationship between viewer and the work of art.
One thing remains true for all artists: they keep working. Singers and instrumentalists continue to practice, actors sharpen their vocal and movement skills, and visual artists continue to create artworks in any number of forms.
One such visual artist is St. John’s parishioner Jil Evans, whose paintings are held in high regard by art lovers and critics alike. The pandemic has not slowed Jil in the least, as testified by the work you see below. In Jil’s own words regarding her work during this challenging time:

“Back in March when the pandemic shut so many places down, I felt fortunate that I still had a studio to go to. I am part of an artist co-op, Traffic Zone Center For Visual Art in downtown Minneapolis. Our studios remained available, and several artists came in, sanitized all surfaces, and kept social distance. I felt blessed to have space and quiet in which to work.

“One thing I have been doing is working small. After having worked on a large project the last two years, a traveling exhibit called The Heart’s Bright and Dark Light, that was supposed to be at St. Catherine’s University this past spring, it now has an online presence at here.

These are the large works that were part of the traveling show, now back at the studio being un-wrapped. 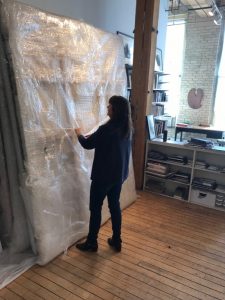 Since then, I have been working small. To give you an idea of my process for a series of several small, 12 x 12 inch panels, I begin with images of “found” light, that is, various ways I capture light in the natural world. 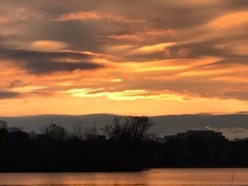 I also work with images of floods I have been photographing for several years in Minnesota, especially along the Cannon River. 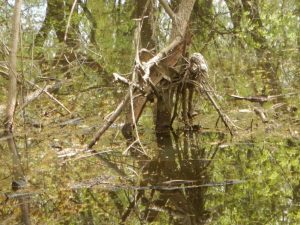 In this instance, I downloaded both photographs onto an I-pad app I have, called Procreate, (ridiculous name) and I then created this collage. 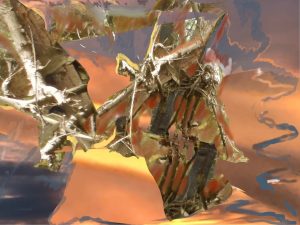 From this collage I worked to make this painting, oil on panel, 12 x 12 inches. 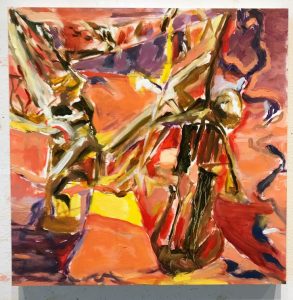 This summer I’ve worked outside as much as possible because I craved the air, sun, wind, green, and movement of the natural world. I like to experiment with abstraction from observation, staying open. Staying open might seem like the opposite of what we are supposed to do physically, but it’s really important to my inner life. And for that I need the prayers of the saints of St. John’s.