We are worshiping together, in new ways!
To watch our most recent Sunday services, go here. To sign up for St. John’s weekly eNewsletter, scroll to the bottom of this page.

Sunday is traditionally when Episcopalians gather for worship. We call our principal weekly worship service Holy Eucharist, which is also known as the Lord’s Supper, Holy Communion, or Mass. In most Episcopal churches, worship is accompanied by the singing of hymns, and in some churches, much of the service is sung.

Episcopalians worship in many different styles, ranging from very formal, ancient, and multi-sensory rites with lots of singing, music, fancy clothes (called vestments), and incense, to informal services with contemporary music. Yet all worship in the Episcopal Church is based in the Book of Common Prayer, which gives worship a familiar feel, no matter where you go.

Worship in the Episcopal Church is “liturgical,” meaning that the congregation follows service forms and prays from texts that don’t change greatly from week to week during a season of the year. This sameness gives worship a rhythm that becomes comforting and familiar to the worshipers. After all, life can be chaotic enough as it is.

For the first-time visitor, liturgy may be exhilarating… or confusing. Stand. Sit. Kneel. Stand. Sit (or is it kneel?) Participatory elements may provide a challenge for the first-time visitor. Don’t worry. Liturgical worship can be compared with a dance: once you learn the steps, you come to appreciate the rhythm, and it becomes satisfying to dance, again and again, as the music changes.

In spite of the diversity of worship styles in the Episcopal Church, Holy Eucharist always has the same components and the same shape. It is commonly known as the part of the service where we “receive communion.”

The Liturgy of the Word

We begin by praising God through song and prayer, and then listen to as many as four readings from the Bible: usually one from the Old Testament, a Psalm, something from the Epistles, and (always) a reading from the Gospels. The psalm is usually sung or recited by the congregation.

Next, a sermon interpreting the readings appointed for the day is preached.

Next, the congregation prays together—for the Church, the World, and those in need. We pray for the sick, thank God for all the good things in our lives, and finally, we pray for the dead. The presider (e.g. priest, bishop, lay minister) concludes with a prayer that gathers the petitions into a communal offering.

Then as a congregation we acknowledge our sins before God and one another. This is a corporate confession of what we have done and what we have left undone, followed by an assurance of forgiveness spoken by the presider. With these words, the presider assures the congregation that God is always ready to forgive us.

The congregation then greets one another with a sign of peace.

The Liturgy of the Table

Next, the priest stands at the table, which has been set with a cup of wine and a plate of bread or wafers, raises his or her hands, and greets the congregation again, saying “The Lord be With You.” Now begins the Eucharistic Prayer, in which the presider tells the story of our faith, from the beginning of Creation, through the choosing of Israel to be God’s people, through our continual turning away from God, and God’s calling us to return. Finally, the presider tells the story of the coming of Jesus Christ, and about the night before his death, on which he instituted the Eucharistic meal (communion) as a continual remembrance of him.

At St. John’s we practice open communion. All are welcome to participate fully in worship, including the Lord’s Supper, or Holy Eucharist. After the prayers have been said, please come forward, if you wish, to receive the bread and the wine, symbols of Christ’s presence with us.

Going Into the World

At the end of the Eucharist, the congregation prays once more in thanksgiving, and then is sent out to be God’s hands and feet in the world. 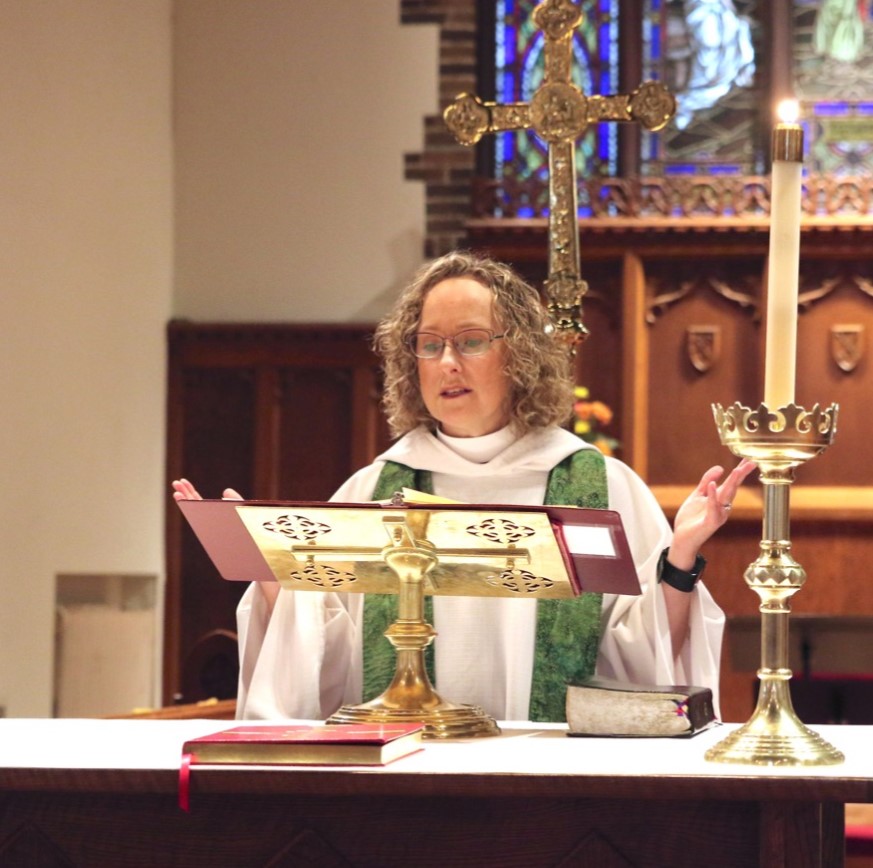